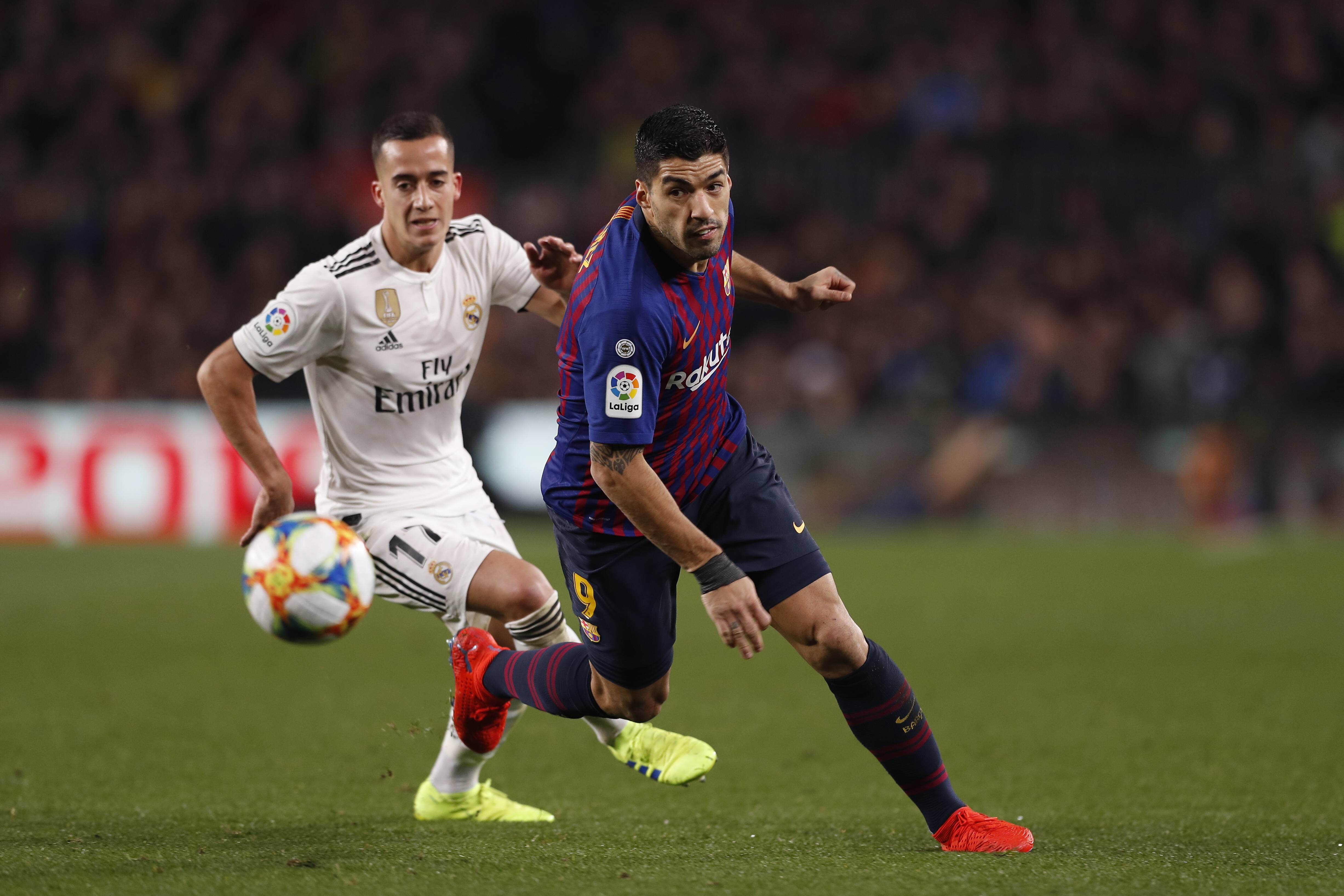 Real draw 1:1 in the 1st leg The two giants will already have squared off in the second leg of the Copa del Rey semi-final. The 1st leg ended 1:1 when Lucas Vázquez and Malcom got the goals. Real were extremely impressive for an hour and created the better chances to score a second, but faded with a combination of tiredness and the arrival of Lionel Messi in the final half-hour.

Last chance for Real in LaLiga

Third-placed Real Madrid will aim to recover from their shock defeat at home to Girona. It is probably the very last chance for Real to engage in the title race. With a win, the Blancos reduce the distance to 6 points. It is worth remembering that Barça have already won against Madrid this season, in the League Clásico that was played at the Camp Nou.

Where to watch Real Madrid - Barcelona online and on TV?

Sports streaming subscription service Eleven Sports is no longer the exclusive home of La Liga in the UK and Ireland after pay-TV broadcaster Premier Sports secured rights to a selection of games from Spanish soccer's top flight. Fans will now be able to watch La Liga on TV, including el clasico on March 2 as Real Madrid host Barcelona. Moreover Barcelona and Real Madrid fans in the UK will be able to watch Barcelona vs Real Madrid online, through their Eleven Sports iOS mobile and tablet apps (available from the Apple App Store) as well as Android mobile (available from the Google Play store). In Germany the Clásico will be shown live on sports streaming service DAZN, which brings fans sports streams with a Netflix-style subscription model. DAZN will air both Clásicos live. BeIN Sports has the broadcast right to show Real Madrid – Barcelona in France, both in the league and in the cup.

You can find detailed broadcast information a few days before the Real Madrid vs Barcelona match in the SportEventz App or on sporteventz.com. So, check your SportEventz app and don’t miss out the most important club football match in the autumn! 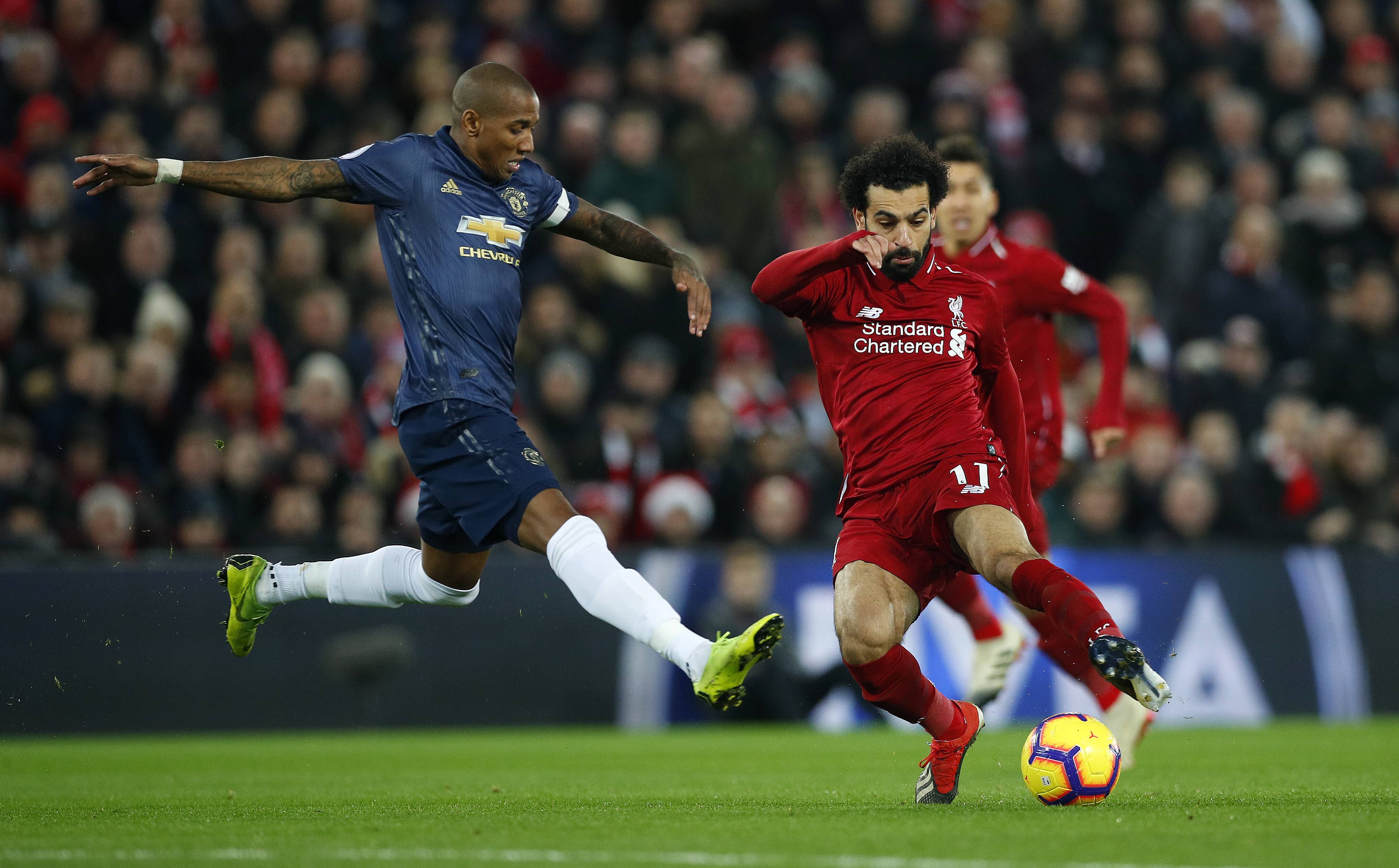 Once again it’s time for most famous fixture in English football: the North West Derby between Manchester United and Liverpool FC. Much has changed since the last match between the two football giants on December 16, especially for the Red Devils. The 1-3 defeat against Liverpool was the beginning of the end of the Mourinho era at Old Trafford. Only two days later „the Special One“ was sacked and replaced by ManUnited icon Ole Gunnar Solskjaer. Since then the Red Devils have been in great form and even beat both Arsenal and Tottenham. The basis of this success are the improved performances of United’s top players, who seemed constrained under Mourinho and got reinvigorated by Solskjaer. With the likes of Paul Pogba (8 goals/5 assists in the Premier League under Solskjaer) and Marcus Rashford (6/2), they are on their way to better days.

And Liverpool? The Reds continued their run in the league, but they lost their vital match against title contender Manchester City and recently struggled against Leicester and West Ham (both 1-1). Yet Liverpool still leads the table (together with Manchester City) and is one of the two hottest contender for this years Premier League title. So it promises to be one of the most exciting matches between Manchester United and Liverpool in recent years. The clash will take place on February 24 at 2:05pm (UTC) / 3:05pm (CET).

Watch United - Liverpool on TV or via live stream

United - Liverpool won't be aired live on free television, neither in the UK nor in Germany. Liverpool and United fans in the UK and Ireland will be able to watch the Premier League clash on Sky Sports. In Germany Manchester United - Liverpool will be shown live on sports streaming service DAZN, which brings fans sports streams with a Netflix-style subscription model. RMC Sport airs Liverpool-United in France.

You can find detailed broadcast information for United - Liverpool in the SportEventz App or on sporteventz.com. So, check your SportEventz app and don’t miss out the North west derby!

Watch Lyon - PSG live on TV or via live stream 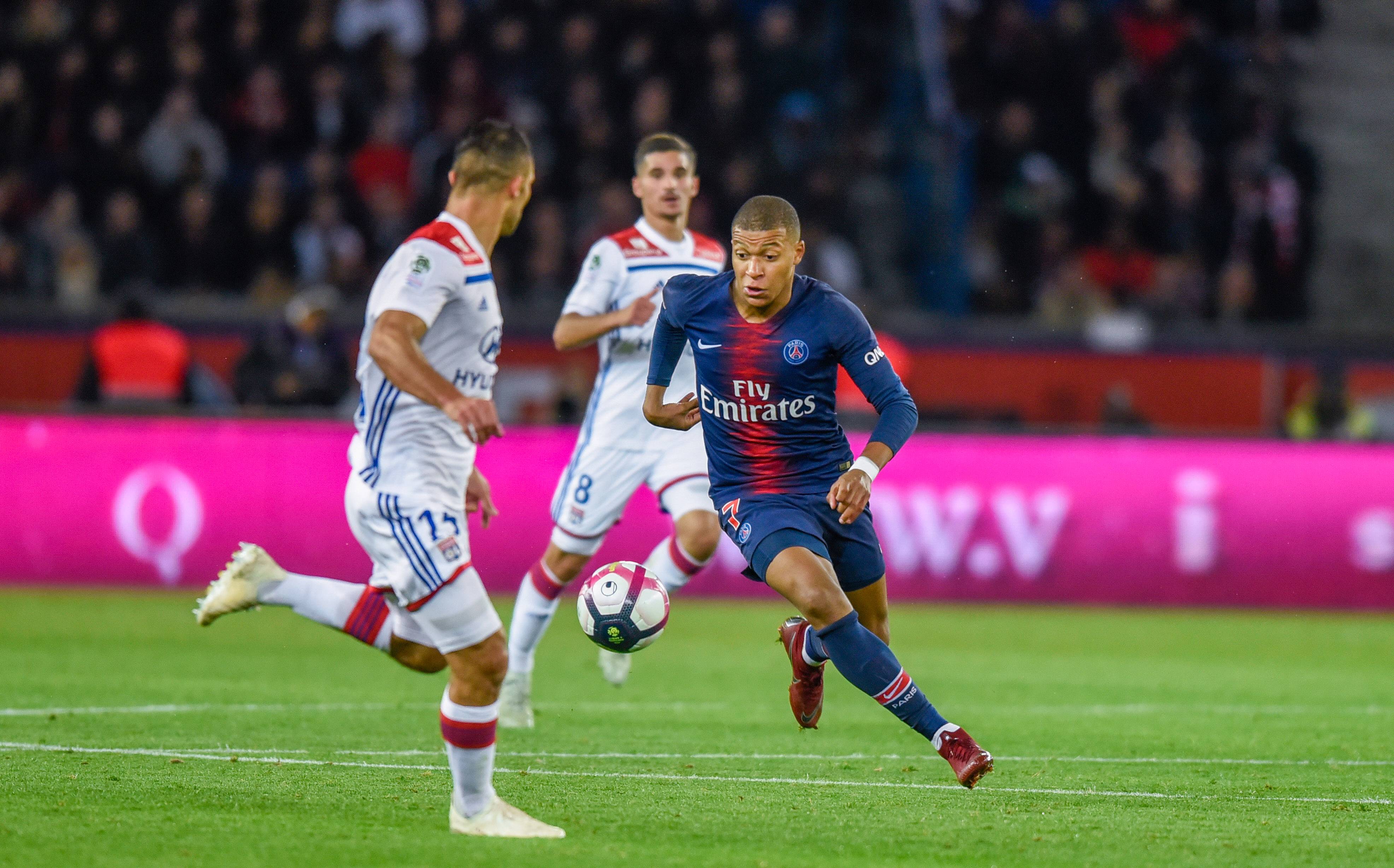 Watch Lyon - PSG live on TV or via live stream

Last game between both sides: PSG-Lyon 5:0

It was an absolutely horror show in the first leg for Lyon, when World Cup winner Kylian Mbappe scored four goals in 13 second-half minutes. Paris Saint-Germain destroyed Lyon 5:0 and both sides were finishing with 10 men.

No Neymar after foot injury

Once again, PSG will look to weather the storm without Neymar. The PSG superstar will miss 10 weeks of play. That keeping him out of the clash against Olympique Lyon and the massive upcoming Champions League tie against Manchester United. Thomas Tuchel’s side will be without Marco Verratti, who has an ankle injury of his own, while contract rebel Adrien Rabiot has been frozen out, so the arrival of Leandro Paredes (Zenit St. Petersburg) is particularly welcome. Three key players whose absences will definitely be to Lyon's advantage, especially with the Bad Gones fans on their side.

Where and how to watch Lyon – Paris live

The top of the table clash in France will be shown live in the UK. BT Sport 1 will broadcast the Lyon-PSG live for customers in Great Britain. DAZN offers OL-PSG via live stream for subscribers in Germany and Austria. Get a free DAZN trial month here! Fans in France can watch Lyon-Paris live on Canal Plus. Check out more broadcast information for Olympique Lyon-Paris Saint-Germain in the SportEventz App or on sporteventz.com. 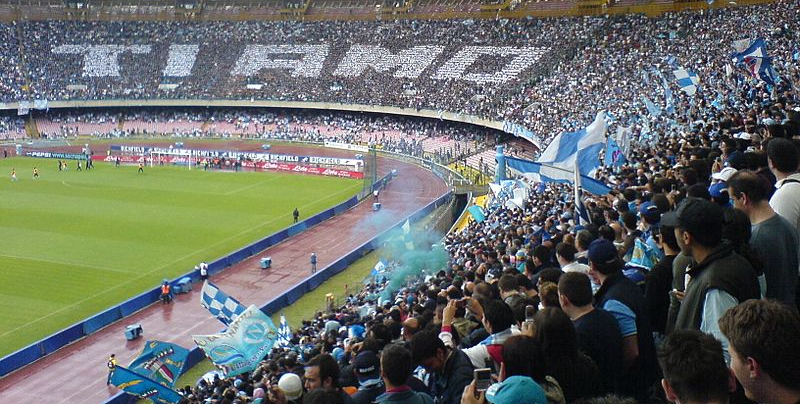 When Serie A powerhouses Napoli and Juventus meet, there is always a lot of tension in the air. The rivalry of the two clubs stems from the historical conflict between the rich north of the country (represented by Juventus) and the poor south of Italy (represented by Napoli). As the only Italian champion ever from the south, Napoli always tries to put a spoke in the wheels of its dominant northern rivals. Whether Napoli succeed with this plan or Juventus continues its dominance can be seen on March 3rd at 7:30pm (UTC) / 8:30pm (CET).

Napoli vs Juve in recent years

Nowadays the two clubs are the flagships of Italian football. Juventus developed into the omnipotent dominator of the Serie A by winning every league title in the last seven years. Napoli on the other hand needed a bit more time and acclimation but managed to become the first rival of Juve and even came close to burst the supremacy last season.

In a memorable match on matchday 34 of last season Napoli beat the record champion 1-0 through a late header shot by Kalidou Koulibaly. This victory brought the thrill back to the title race, even though Napoli missed the chance of overtaking Juventus by the end of the season. Just like last season this years duel between the two teams could be a preliminary decision of the title race. Juve is still unbeaten in the league and is heading for the eigth consecutive Scudetto while Napoli tries to keep on Juventus’ tail.

It promises to be yet another exciting clash of the two clubs. Not only because the record of the last five matches between Napoli and Juve is balanced (2-1-2), but also because of the presence of two of the most lethal attacking lines in Europe. When Cristiano Ronaldo, Paulo Dybala, Douglas Costa and Mario Mandzukic meet Dries Mertens, Arkadiusz Milik, Lorenzo Insigne and José Callejon a lot of spectacle can be expected.

Fans of Italian football in Germany can watch Napoli vs Juventus live on DAZN. The live stream provider broadcasts every Serie A match of the season and offers a free trial month.

In Italy, the match can be seen on Sky Sport Uno (13.0°E) just like every Sunday evening match of the Serie A.

In the UK, Eleven Sports offers a Napoli vs Juventus live stream. A monthly pass costs around six pounds.

For more detailed information on where to watch Napoli vs Juventus live take a look at the SportEventz app (available on iOS and Android) or sporteventz.com.

The end of the NFL season is nearing and as usual it ends with the biggest spectacle American Football has to offer: the Super Bowl. This years Super Bowl will be the 53rd holding of the biggest game in American Football and takes place on the night of February 3rd. Kickoff will be at 11:30pm (GMT)/12:30am (CET). As one of the biggest sport events in the world the Super Bowl is broadcasted live in almost every country in the world. We give you all the information on the live coverage in your country!

This years Super Bowl fixture will be New England Patriots vs Los Angeles Rams. It will be the clash of experience (Patriots) and youthful elan (Rams). The Patriots dispose of the most successful and experienced quarterback-coach-duo in NFL history in the persons of Tom Brady (41) and Bill Belichick (66). Super Bowl LIII will be their ninth Super Bowl of which they won five. The Rams lack this kind of experience, yet they still have world class at their disposal. Head coach Sean McVay (32) is one of the most exciting and promising coach talents the NFL has seen in years, while quarterback Jared Goff (24) lives up to Rams’ expectations of their 2016 first overall pick. It promises to be yet another exciting and thrilling Super Bowl!

Where and how to watch the Super Bowl

Fans of American Football in the UK can watch the Super Bowl, as well as all other NFL playoff games, live on BBC One (27.5°W) for free.

In Germany you can choose between different broadcasts. Firstly, DAZN offers two live streams of the Super Bowl, one with German commentary and another with the original English commentary. You can get a free DAZN trial month here. Another live stream will be shown on ran.de. On free TV, the game will be broadcasted by ProSieben (9.0°E). The broadcast starts at 10:45pm (CET).

The broadcaster for this years Super Bowl in the USA will be CBS.

You can find detailed broadcast information for the Super Bowl in the SportEventz App or on sporteventz.com. So, check your SportEventz app and don’t miss out the biggest sport event of the year!